The Memory and Reconciliation in the Asia-Pacific program is aimed at promoting the study of the ongoing “memory wars” as well as reconciliation efforts in the region. Created in the fall of 2003 with a grant from the United States Institute of Peace (USIP) and supported with other resources, our program is hosted by the Sigur Center for Asian Studies at the George Washington University’s Elliott School of International Affairs in Washington, D.C.

Please note that the external links shared on this website are being provided for informational purposes only, and their inclusion does not constitute an endorsement or approval by the Program. For any questions, suggestions or updates regarding the contents of our website, please contact us at [email protected] Your support is much appreciated.

Editorial from Taiwan-based branch of China Times: “Japan’s attempts to downplay or even deny its atrocities during World War II is the biggest obstacle in China-Japan relations. In this regard, the responsibility of improving bilateral ties between the two countries…

Article by SF teacher and writer Nicolas Gattig: “We mustn’t stand for actual denial, but should let others repent in the best way they can. This means graceful engagement — and humility about our own wrongs.”

Article on prospect of trilateral foreign ministerial summit: “Japanese and South Korean leaders have proposed holding a trilateral summit with their Chinese counterpart for the first time since 2012, their deputies said…”

Article from Japan Times, November 11, 2014: “Japan maintains there is no territorial row over Senkakus”

Article from the New York Times, October 12, 2014: By Michael Fitzpatrick TOKYO — Japan’s simultaneous embrace of nationalism and cosmopolitanism is generating ambiguous signals from its education policy makers. They are rewriting textbooks along what they call “patriotic” lines, alienating…

Article from Asahi Shimbun, October 02, 2014 : Prime Minister Shinzo Abe stated he has no plans to issue a new statement to replace a landmark 1993 apology to former “comfort women” forced to provide sex to wartime Japanese soldiers. “I am… 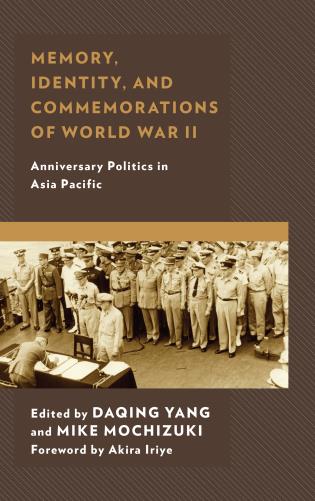 The book is based on a conference convened by the Project in 2015. This book presents the first large-scale analysis of how countries in the Asia Pacific and beyond commemorated the seventieth anniversaries of the end of World War II. Consisting of in-depth case studies of China, Taiwan, Korea, Japan, Singapore, the Philippines, United States, Russia, and Germany, this unique collective effort demonstrates how memories of the past as reflected in public commemorations and contemporary politics—both internal and international—profoundly affect each other.

The book can be purchased here.

75 Year Since: Confronting Memories of WWII in East Asia

Professor Yang recently moderated an EU-Russia Civil Society Forum panel on memory of World War II in East Asia. The speakers discussed the mainstream narratives on WWII history in East Asia, the current challenges in the WWII commemoration within the region and how WWII is reflected in the history education at school.